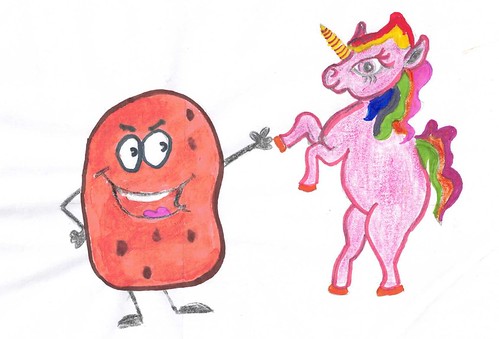 Once upon a time there was a unicorn called Rainbow who lived in a place called Cuckoo Land.

One day she was outside playing with her best friend Pat the Potato.

It was very sunny and the sun was very bright, but she was sad because Pat couldn't walk.

She always wanted Pat to be able to do what she could do. She wanted to turn Pat into a unicorn.

She chatted to a wise man and asked him how she could do that.

“You are in a dream and to get out of it you have to use your magic powers, “ said the old wise man.

Rainbow said, “I don't want to use up my magic.”

But the next day she had her powers. Pat was back in her bedroom, and then Pat looked different.

Pat had a horn and he was half Unicorn. And then Pat had a tail. Pat grew bigger but he stopped.

They heard barking outside his window and there were 200 dogs outside. Pat and Rainbow were afraid.

The dogs started eating the house, and Pat was really confused.  All the dogs got into the house. And then...