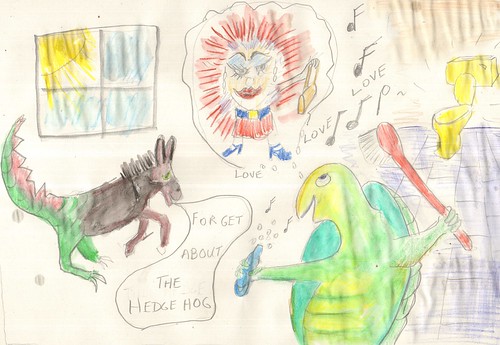 It was a nice Monday morning when Todd, the Turtle, was singing in the shower.

He looked out the window and saw Donkey, the dinosaur, planting a flower bed.

At that exact moment, he realised his friend Donkey was using a plastic bag to carry the seeds.

He was disgusted!  So he jumped out of the shower, quickly dried his shell and rushed down the stairs.  When he arrived in the garden, he said:

“You’re not my best friend anymore!  You’re using a plastic bag and you know I’m scared of plastic!”

But before Donkey had a chance to say anything back, Todd quickly went to use his golden toilet which he had purchased from the Turtle Shop.

But before he could get there he heard Donkey screaming:

“You don’t understand Todd!  It’s not my fault!  It’s the fault of Stephen, the very super evil sandwich and his plastic army!!!”

A few minutes later when Todd was sitting on his Golden toilet he had an idea.  He would go to talk to Stephen, the super evil Sandwich.

But first he thought he would need his own big army.  He didn’t think that Donkey would be good enough as an individual.

As he was walking to the door, General Blaize the Cat (evil Stephen’s right hand cat woman) barged in and kidnapped Todd and Donkey…