The Story of Bob the Fly 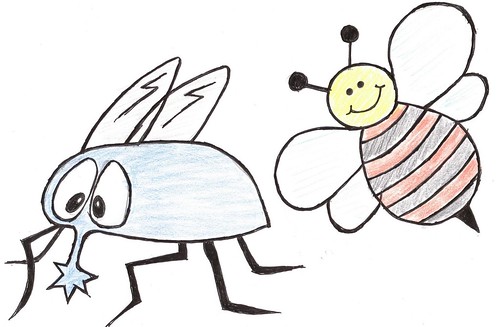 Bob the fly is in an old dusty attic. He is walking around talking to his friend Billy the bee.

Bob wants to get out of the attic but he can’t fly out.

Billy the bee tries to carry Bob but then the two of them fall over.

“Ouch!” they both screamed together.

Bob and Billy keep on trying to get out of the attic. Suddenly, a door opens and a woman walks up the ladder to the attic.

Billy and Bob see an opening, but Bob is too scared to go down the ladder - he is afraid of heights.

Billy encourages Bob to go down the ladder and tries to distract the woman by buzzing around the attic.

The woman sees Bob and she is scared. Bob tries to flap his wings, but they still don’t work. Billy is begining to panic.

The woman, with Billy the bee buzzing around her, starts to panic as well and goes back down the ladder – leaving the attic door open.

Bob suggests that Billy tries again to lift him up. This time it works and they fly down out the attic, through a window and into a forest. 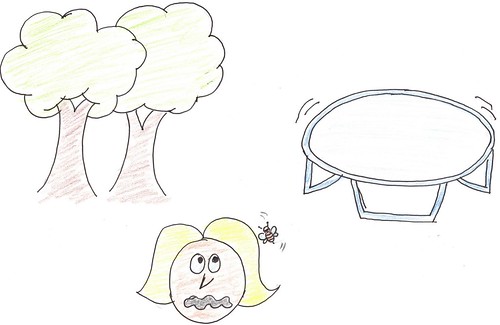 Billy sees some beautiful flowers and lands on them, so Bob falls from his back.

“Help me, Billy come back!” Bob screams. He starts flapping his wings, and begins to fly a bit.

Billy sees Bob has started to fly and shouts, “Flap your wings harder, you are beginning to fly!”

Bob starts to get really tired from flapping his wings and falls straight on the ground – he bounces up again, as it happens to be a trampoline.

He bounces so high that he hits a tree, so he falls right back down.

This time he lands in a pile of mud. Bob thought this was good fun and shouts, “Come back Billy, come back!”

But Billy is nowhere to be seen.

Bob suddenly takes off and flies properly – he gets so distracted by this that he bashes into a tree. He didn’t know that Billy was hiding, watching him all the time.

Billy wanted to see how far Bob could fly. They both celebrate together by having a big drink of honey.

After that, they go to the trampoline and start doing backflips and summersaults...