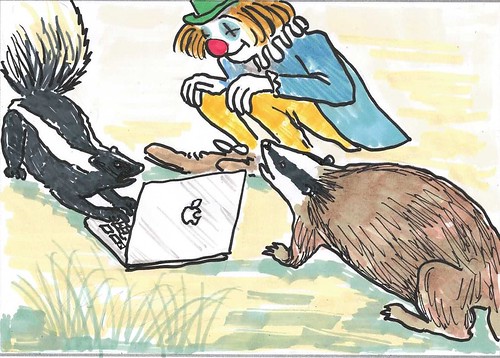 The main character of this story is Stinky the Skunk. Stinky was born in 1989 on May 25th.

Stinky's biggest dream was to get faster Internet.

Stinky heard that a circus was coming into town, and Stinky was afraid of clowns.

When Stinky went to the shop, he met his best friend – Bob the Badger.

They decided to run away and live their own life. But they had to wait for a long time for the Internet to load.

Later that night, Stinky had a nightmare about clowns coming into his tree.

Bob the Badger had fallen out of his bed and was sleeping on the floor. Stinky woke up because he heard Bob falling, and he got a shock.

But then he heard another huge noise outside his house. It was the clowns inside a truck. Stinky got Bob up onto his bed, and he got under his bed to hide.

The clowns came into Stinky's tree, caught Bob the Badger and stole money.