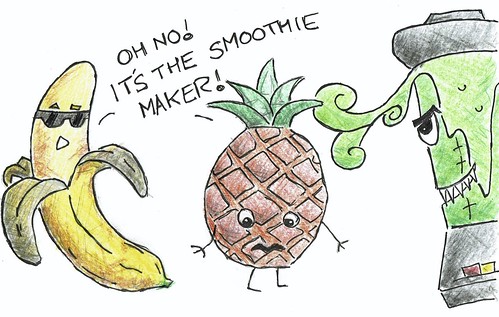 Once upon a time Steve the Secret Banana and Bob the Pineapple were walking to the pet shop and they met Rosie the Duck.

Rosie told them about how dangerous humans were with their Smoothie Makers. They ran away from the Smoothie Makers and looked for a guard dog to protect them.

They found one called Tankie.

They heard Tankie talking to someone about tripping people up. They wanted to make the place safer so they made friends with Tankie and Tankie promised not to trip people up any more.

Steve and Bob decided to take over the world and make it safe for fruit, but they got scared and ran away. They escaped to Japan but found it was full of dragons.

They found a boat and sailed towards Croatia, but they were surrounded by sharks.

Bravely they jumped on the back of the sharks, and headed towards a safer place – Ireland.

Tankie found some Superjuice and acquired superpowers. The wind changed and blew them off course.

Instead of getting to Ireland they were brought to a strange place full of fruit, which they thought was an island. 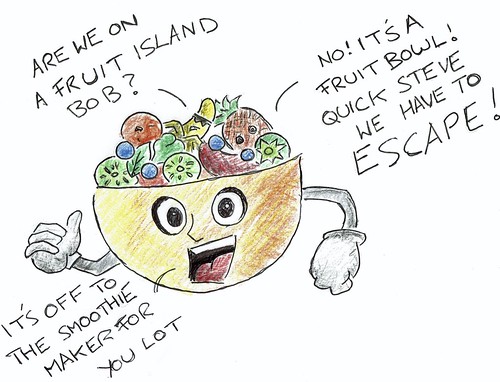 In fact it was a fruit bowl.

They were surrounded by humans with Smoothie Makers and tried to escape to Korea.

They tried and tried to get out of the fruit bowl and finally they dropped down onto the floor.

Then more dragons appeared. Luckily they found a nice ghost who helped them escape from the dragons.

They met Billy the Burger and a dragon’s head peeked around the corner...