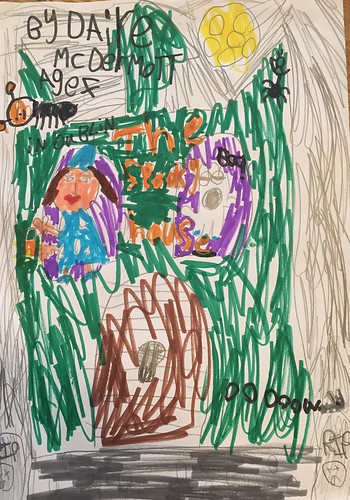 Once upon a time there was a little girl called Mary. One day she went to a haunted house. The house was called The Spooky House.

The house was known to be cursed and inside was a ghost named Creepy. He used to be a boy, but he went into the house one night, even though he was told not to.

He didn't listen. He did not leave before sunrise, so he got turned into a ghost.

Mary walked around the house, hoping she would not turn into a ghost too. By accident, Mary stepped on a trap door.

She fell down to the bottom of the basement, there was a big creepy spider. In one glimpse of Mary's eye, she could see A GHOST!! She had heard stories about the boy who had turned into a ghost but never actually believed it until this day.

Mary said to the ghost, “What is your name?'”

The ghost said, “I am Creepy, but I was once known as Sam. I got stuck as a ghost but I want to be a boy again.”

The ghost replied, “To help me, you must go out the back to the graveyard and pass a zombie and a werewolf to get a special diamond that is hidden. If you get this, I will turn back to being a boy.”

So Mary crossed the creepy graveyard with only a few scratches from the werewolf and the zombie. She did it!!!

Now Mary had to look for the diamond. She found it in one of the graves. She ran back to Creepy and gave it to him. At that moment Creepy turned into Sam again.

Sam felt super happy. He said “Thank you!” to Mary.

Mary felt very proud of herself. Mary and Sam walked back to their village together.