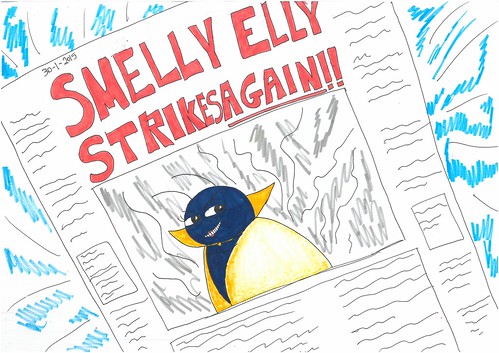 “SMELLY ELLY STRIKES AGAIN!!! Robbery at the Museum of Country Life!” was the front page story.

Marcus the Monkey burst into the apartment, throwing sparkles all over the room.

“Whattttt???” said Mr Dingle in a very high-pitched voice. “I have to get on that case right away, before any of the so called GOOD detectives get there before me. Come on Marcus!”

Mr Dingle ran down the stairs with Marcus following behind him, spreading sparkles. They squeezed through the door and hopped into their cherry red 151 Ferarri.

On the way to the Museum of Country Life, they stopped to get some popcorn and an onion-flavoured 99.

While they were in the shop, Smelly Elly flew out of the gas pump and stole the cherry red Ferrari and Mr Dingle’s detective badge.

Mr. Dingle walked out of the shop and saw that his beautiful car was gone.

Mr Dingle lay down and started licking the ice cream off the ground. He said, “That was a waste of food, Marcus!”
They “borrowed” a 1987 Land Rover Defender. As they drove off Mr Bob, who owned it, shouted, “Don’t get any disgusting onion-flavoured ice cream on my seats! I just cleaned the car.”

Mr Dingle and Marcus zoomed off and finally reached the Museum of Country Life. They wandered around trying to find the entrance.

When they did, they tried to get into the crime scene but one of the other detectives (the so- called “good” detective) asked to see Mr Dingle’s badge.

“Sorry buddy... if you don’t have your badge you can’t get in,” replied the detective.

Meanwhile, Marcus had been sneaking around the museum, trying to find rope. He found a hangman’s rope in one of the exhibits and a police baton. He ran back up and knocked the so called “good” detective out! 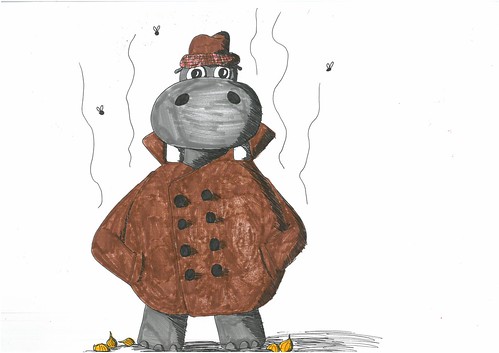 Mr Dingle and Marcus tied the detective up with the rope and put him in the lift. They took his badge and made a run for it.

Mr Dingle and Marcus walked around trying to find some clues. They found a bit of yellow cape.

“Smelly Elly, I can smell that a mile away!” Mr. Dingle whispered to himself.
“Do you want to check the tapes?” suggested Brigid the curator.

“No one ever would have thought of that. You’re a genius,” said Brigid sarcastically.
When they viewed the tapes, they saw a little speck moving quite fast across the room taking all the valuables.

As soon as they zoomed in, they knew for sure. Smelly Elly had stolen all the priceless, precious items.

Mr Dingle and Marcus’ first task was to find Smelly Elly. They left the tape room to search. They went downstairs and Marcus stopped to take a mugshot. On their way back, they found a curious room that no one had ever found before -  hidden behind a bookshelf.

They tried to open it without success. Marcus took out a book about sparkles and the hidden door opened.

Inside the room it was pitch dark. The only light was a gold shine from the corner of the room. They walked over to investigate and Marcus shone his iPhone on it.

It was Smelly Elly stuck on a spider web and all of the valuables were underneath her.

“We finally got you!” shouted Mr Dingle, his voice booming across the room.

They locked Smelly Elly in a ladybird-size jam jar and took her to the police station.

To reward Mr Dingle, the townsfolk decided to contribute a lifetime supply of deodorant.

And everyone lived happily ever after!