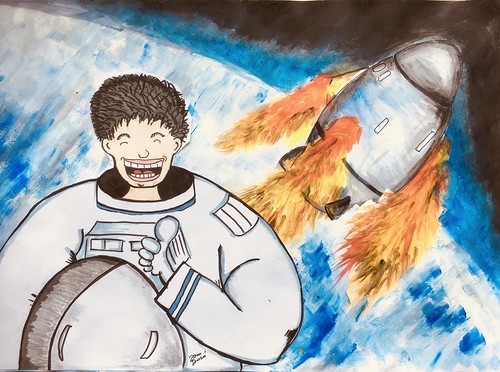 Simon was a little boy aged twelve. He absolutely loved space. When he was in bed, Simon would dream of going to space in an enormous rocket. His favourite movie was any type of sci-fi movie, he had Space Invaders birthdays, space-related Christmas presents. In short, everything had a bit of space-related things in it.

Our story begins when Simon got a scholarship to be the first ever kid in space. Simon was over the moon, the day he said his goodbyes to his family and friends and set out on his journey to NASA.

For the next eight months, Simon did a lot of training to learn how to take off, land, control turbulence and obviously how to fly the aircraft. Finally, the day came to when Simon was going to set a world record and go into space! Simon clipped on his seatbelt and pulled a big grey lever back towards him and the rocket started to go up, up and away. Simon looked out the cockpit and saw all the twinkling little stars shining very bright,

He looked behind him and saw earth becoming very small as he was going 100 miles an hour in the rocket. “I will be back soon,” he whispered as if he could talk to the planet. 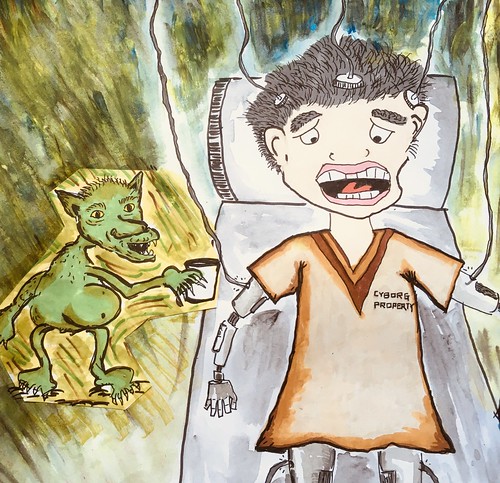 Suddenly, the whole entire spacecraft started to shake. Simon then unbuckled his seatbelt and pushed himself out of his seat.

He was now flying! It felt quite fun, but he knew he had other things to think about.

The craft continued to shake. Simon slipped on his helmet and made his way outside. Suddenly Simon saw something metal heading his way, he decided to ignore the strangely shaped object and turned around. But before he knew it, the metal object hit him bang slap in the head.

Simon woke up in a green glowing room, was he dreaming or was asleep for five minutes, five hours or even five years! Then a small looking goblin waddled over to him and gave him a glass of water. “Are you okay now asked the goblin?” the goblin asked in a sort of French accent.

“Where am I?” replied Simon.

“You, young sir, are in Cyborg City,” replied the goblin proudly.

“But I’m not a Cyborg” wailed Simon.

“Oh yes you are! Take a look in the mirror if you don’t believe me.” 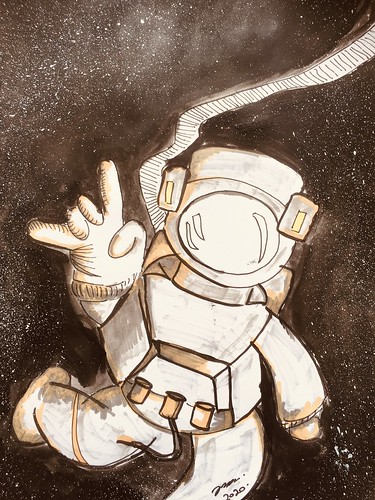 Simon stumbled over to the mirror and took one glance at himself and let out a scream so loud that it could make your eardrums bleed. He did this because there was a metal arm attached to him and a titanium leg.

There were many other things attached to the left side of his body but now Simon really knew he was a Cyborg.

When Simon woke up next time, he was in a hospital bed with lots of doctors dressed in lab coats all surrounding him.

Where was the French goblin and why wasn’t he in that green room? The doctors explained to him that he was in a coma for a day and a half and that Simon got concussed when a satellite hit him in the head.

That night when Simon was in bed, he felt something cold and uncomfortable at his legs, he whipped off his blanket and saw a metal leg attached to him.” Oh no, not this again!”