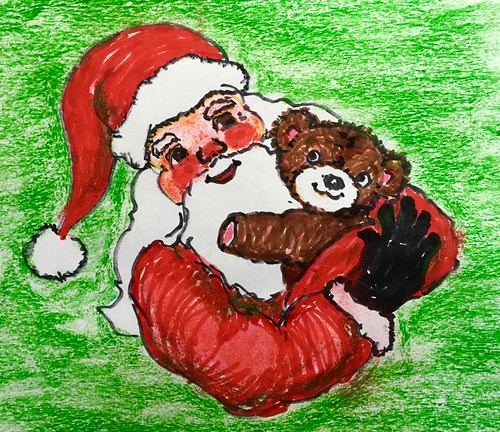 It was two days before Christmas. Santa was cleaning his sleigh. He belly-flopped into the sleigh. He looked to the side and saw this teddy bear.

“Oh!” said Santa. “It’s the teddy bear from my childhood!” Santa noticed a note pinned to the teddy. Santa read the note.

To whoever finds this note, I will cuddle you! Only if you come to Hawaii, will it happen.

Santa pulled his best friend, Gerald the banana, out of his pocket. Santa said, “Gerald, we are going to Hawaii.”

“I’m so excited!” said Gerald. Santa explained why they had to go to Hawaii.

“Is there snow there?” Gerald asked.

“I do not know,” Santa replied. 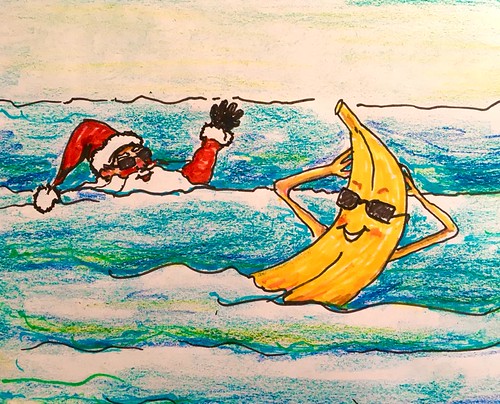 Santa hopped in his sleigh, but he broke it! To get to Hawaii, he had to ride on Rudolph’s back.

Rudolph was very tired but he made it to Hawai'i with Santa and Gerald.

There was no snow and it was very hot. Luckily, Santa had brought his swim shorts!

Gerald the banana put on his sunglasses and said, “Hooray, let’s go!”

Santa, Gerald and Rudolph went for a swim. Gerald got a bit soggy. He swapped his sunglasses for reading glasses.

Gerald realised that Santa had misread the note...