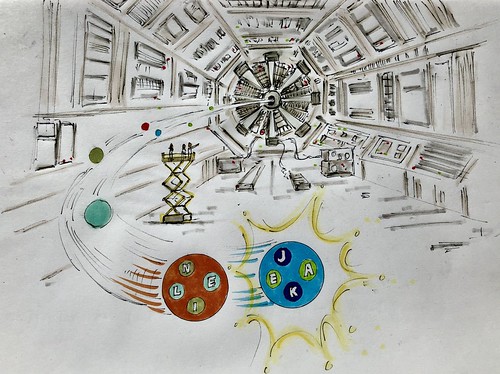 Once upon a time there was three brother quarks, Jake, Jamie and Luke.

They were going on a trip to their favourite place in the whole world, the Large Hadron Collider. They were entering a competition to be smashed there. They were all so excited but,none more so than Jake. He was so excited that he could be famous just like his hero Stephen Quirking.

So, when they arrived, Jake, Jamie and Luke unpacked their stuff at the hotel and went off. Jake was scared as he often got bullied, as he was down quark and his brothers were up quarks, so if he lost this he would be wasted and thrown away. He did have one friend, Neil Boron, who stood by him at every step of the way. Neil was like Jake in many ways, he was smart, quirky and funny. They both enjoyed sports and physics in general, but their favourite pastime was walking their dogs and stopping at the local café, but one time he had an ionizing time as he spilt his latte.

Soon they arrived at the L.H.C and the competition was about to start. The energy in the air was immense. They had to race as the quark with the highest speed has more kinetic energy and would be more useful. He was doing great until the final race, where he and Neil ran and ran but by a plank length Jake won. They both shook hands and celebrated.

The top three quarks in the race got to join a proton, so him and Neil and the other guy (whose name we found out was Shaun) and together they produced the Higgs Boson and became world famous in the scientific community and they decayed within 0.00000000001s and became photons, gluons, and neutrinos and their legacy lived on.