The Pig Who Was Afraid of Food 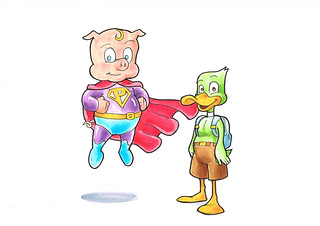 Super Pig the pig was planning a plot in his secret underground base in Foodtown with his friend Quack the duck.

The two friends were planning a way to defeat their archrival, Corn on the Cob.

Eureka!  Suddenly the friends had a terrific idea. 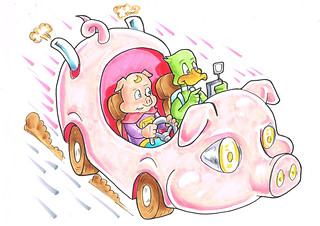 “Come on, Quack, lets get a big saucepan in Home Store and More.  We can cook him up in some boiling hot water!” exclaimed Super Pig.

“But first we have to find where Corn on the Cob is,” said Quack.

“Once we find him, we can sell him to our local Lidl store!” added Super Pig. 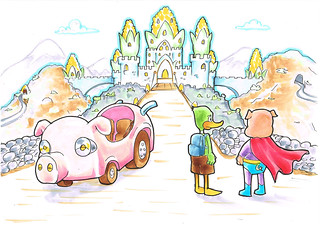 So Super Pig and Quack jumped in the Pig Mobile and set the GPS for the Corn Fields in the Corny Empire.

The friends tumbled out of the Pig Mobile and stared up at a giant castle on a hill.

Just then, the sun was blocked out by a gigantic shadow that fell over them…