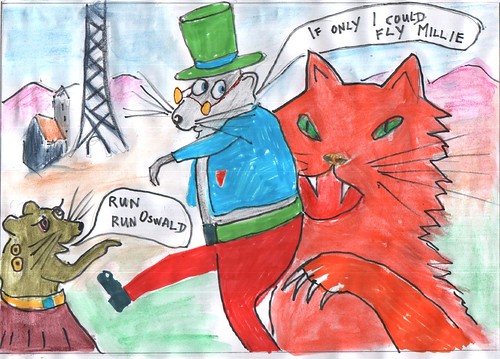 Once upon a time there was a mouse called Oswald.  He lived in an alley in a small hole inside a sculpture.

It was a sculpture of the Eiffel Tower!  The alley way was very clean because Oswald kept it clean by eating all the crumbs.

Oswald had a friend, a girlfriend.  She was called Milly.

One day they felt like moving because a giant fat tabby cat called Amelia was trying to steal the sculpture to add it to her hoard.

“Amelia keeps coming in and saying I want your Eiffel Tower” said Milly.

“OK, I don’t care about nuthin!” replied Oswald, “I’m just playing Fortnite and working out how to make a set of wings for myself.

Back in the other room, Milly turned on “Mouse Channel, RTM” and the mouse news came on as usual.