Oscar and the Golden Top Hat 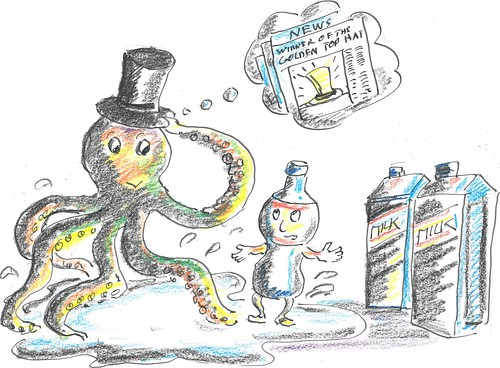 A long, long time ago in a pool of milk in Luxembourg, Oscar the Octopus was an octopus with a top hat.

It was no wonder he was afraid of water because he lived in a pool of milk.

Oscar wouldn’t dare touch the water. He had a friend called Jeffrey the Plastic Bottle with a face.

Jeffrey the Plastic Bottle would never talk (because he’s a plastic bottle).

Oscar’s greatest wish was to achieve the Golden Top Hat. It was really hard for him to get it because he needed to swim in a pool of water for an hour.

Jeffrey was trying to help Oscar to get the Golden Top Hat.

So Jeffrey got Oscar a plastic bag to swim in. Jeffrey the Plastic Bottle was trying to help by taking out the water and putting it on the ground. 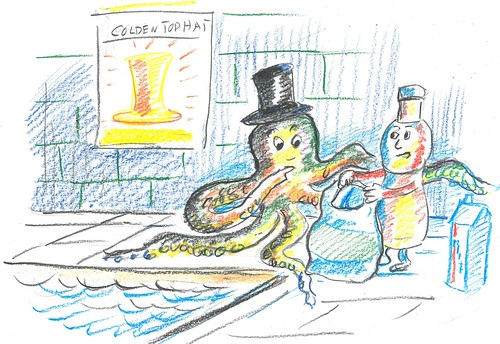 Instead of water, he poured in milk with blue dye.

Oscar drew a face on a plastic bag so when he was in the water they didn’t know that he was afraid of the water.

He went to the bottom of the pool of milk, which was nearly empty.

And then Oscar decided to swim up to the top of the pool of milk and into another pool of milk.