One normal day in November 2009, there was a fast food restaurant named Rade-x. They sold hot dogs and chips and stuff like that.

A boy named Tom went there every week to get a hot dog. Tom had a sister who was really into science and equations. Tom had to bring her to the fast food shop as well because she was too young to stay at home on her own. Every time they went, she would get chips. It was always the same. This time it was different.

Tom's sister stood up with her chips, took Tom's hot dog and ran as fast as she could. She stole Tom's car and drove away. When Tom's sister got home, she locked herself in her bedroom. Her bedroom was jam packed with elixirs and whiteboards with equations on them. She lay the hot dog on her workbench and started writing on her whiteboard. She wanted to make the hot dog ginormous for Tom.

She made some elixir and dropped only a small drip on the hot dog. The hot dog grew and grew until the hot dog was human sized. The thing was the hot dog was vertical. Tom's sister went to take a bite but it turned around and said “please don't bite me”, both of them screamed. It was alive, it could speak.

Tom's sister threw more elixir, but it just grew arms and legs. She decided to show Tom what she had created. Tom was shocked, he couldn't believe what he was seeing. They decided they couldn't tell anyone about this hot dog guy. If it managed to slip out, they would get in loads and loads of trouble.

It had been a week since Tom's sister made this hot dog guy. Tom and his sister said the people would find out about the hot dog guy sooner or later, so they showed everyone in town, and they were all super shocked. Everyone got used to hot dog guy after a while. Hot Dog Guy finally decided to move out and live somewhere else and get a job. He got interviewed at his local police station and he got the job. He was now known as Police Officer Hot Dog.

A chip grew and grew until it was human sized. The chip said, “I will make an army and destroy the world.”

Police Officer Hot Dog went into town looking for Tom's sister. First, he looked in the clothes shops, then he looked in the toy shops, but then he knew which shop to go to. Police Officer Hot Dog had to go to the science shop. He ran into the science shop, but before he could find Tom's sister, there was a chip forcing the cashiers to give the chip all the money. The cashiers were trying to give the chip the money as fast as they could because they were so scared.

She said, “We were lucky enough that you didn't turn bad, so if we make another one we might have a raging hot dog on the loose.” Police Officer Hot Dog was very sad, but he couldn't get too sad because if he gets too sad he cries ketchup.

Tom spoke up and said, “I'll help you fight crime”. Everyone was shocked, they never thought that he would actually want to do that. First, they had to find the right suit for Tom. After they found the perfect suit, they all sat down to watch Doctor Who.

Police Officer Hot Dog took out his baton and gave him a right smack across the noggin. He fell SPLAT on the ground. It seemed that when they get hit, the chips fall asleep. Police Officer Hot Dog couldn't just leave him out on the porch, so he decided to interrogate the chip.  Then he figured that if he interrogated the chip, the chip would find out too much about him. The best thing to do was to just put him in the trash and not think about it. That's what he did.

There was a dark corridor, Police Officer Hot Dog walked slowly through the corridor until he got to the door. He peeked through the keyhole; the chips were making her work her work on some elixir. Tom's sister was working as fast as she could. She was making more chips. 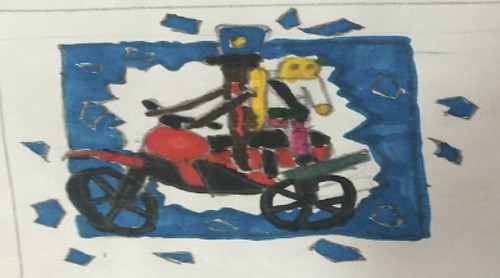 Tom's sister answered, “I'm the one who created you and you get all the credit! And what do I get? Nothing! you don't even know my name.”

When they caught up, Tom shouted, “Stand down!”

The next day Tom's sister showed up and they surrounded her, but Tom's sister fought back, she wouldn't give up easily. She was resisting. The people lost grip, she slipped out and ran away. Everyone started to chase them, but it was too late, she got away again. Their plan had failed yet again. Police Officer Hot Dog was not happy.

Back at wherever Police Officer Hot Dog is -

They were driving for an hour and they still weren't there yet. Another hour later they finally came to a halt. The chips forced Police Officer Hot Dog out of the car. Then they forced him into a building, but it wasn't just any building it was a castle. The chips made him go into the dungeon of the castle. There were shackles in the dungeon, the chips shackled him to them.

First, they didn't do anything, then they tried to ask him questions but Police Officer Hot Dog wouldn't answer any of their questions. Mustard is very hot if you eat it. The reason I'm telling you this is because Police Officer Hot Dog can spit mustard – and he did, into the chip's eyes. Then he spit it onto the shackles, the mustard was so hot that it melted the chains.

They both ran and ran until they got to the Tardis (Doctor Who's spaceship - the Tardis was a blue Police box). When Doctor Who and Police Officer Hot Dog got in the Tardis, Doctor Who started pressing buttons and pulling levers.

Chapter 5
The Battle of the Chips 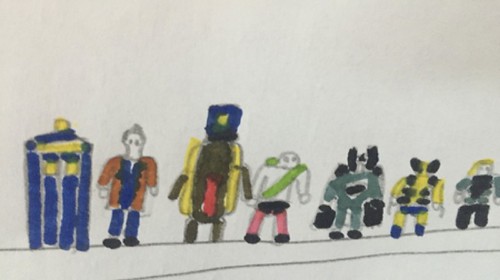 Somewhere in the alleyway - 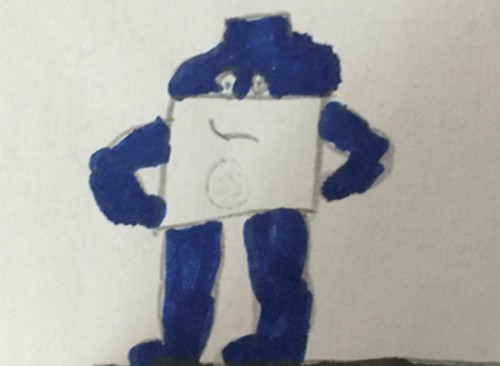 The general chip said angrily, “You have not seen the last of the chip army, you hot dog cop!”

When all the superheroes grow old don't fear, because Sergeant Sippycup is here.

And the weird thing is Doctor Who is here too, and he hasn’t aged a bit.