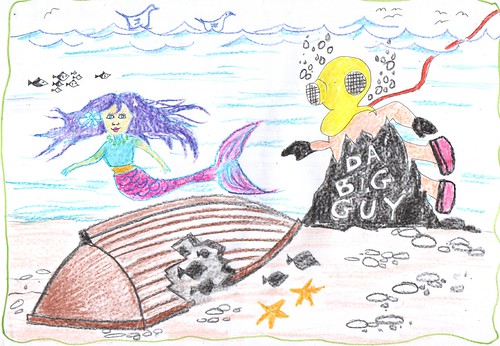 Once there was a mermaid called Mary. She lived under a broken boat under the sea.

Her best friend was a rock called “Da Big Guy”.

They were playing fin-ball with a pearl in the coral stadium.

“Ah the deep-sea diver is coming to kill us!” said Da Big Guy.

“Maybe we should go and try to be friends,” said Mary.

Mary swam up to the diver and swam around him really fast. The diver could barely see because Mary was so fast she looked like a blurred shadow.

The deep sea diver went closer to see what it was. He pulled out his net and threw it over the shadow, catching Mary.

When he saw that she was a mermaid, he spluttered: