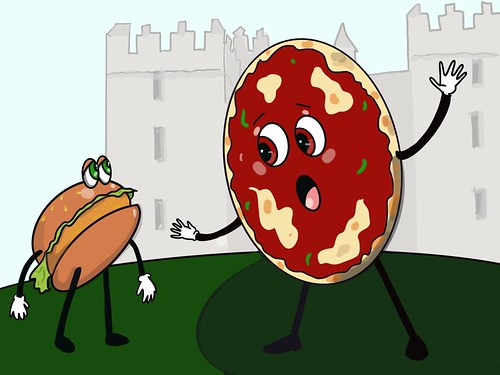 Billy Bob Joe the pizza was in the restaurant at Bunratty Castle with his best friend, Little Timmy the chicken burger.

They were feeling happy because they had run away from Supermac’s and were not going to be eaten.

Billy Bob Joe had always wanted to be a chicken nugget, because he was always next to the chicken nuggets in the kitchen in Supermac’s.

“Do you still want to be a chicken nugget?” asked Little Timmy.

“Well, I know a place where you can become one,” said Little Timmy. “There is a lab at Locke Burger.”

The two friends hopped into their Burgermobile and went to Locke Burger.

It was very busy. Even though people were surprised that a pizza and a chicken burger could move, they were so hungry that they were still trying to eat Billy Bob Joe and Little Timmy.

“Is that the lab?” asked Little Timmy, pointing at an unlocked door with a glowing light coming from underneath. 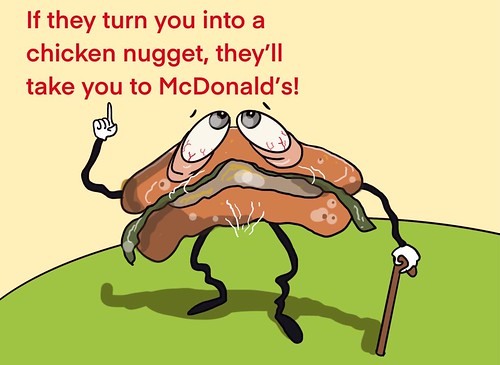 There was a sign on the door that said, DO NOT OPEN! but they opened the door anyway. Inside, there were people wearing white lab coats.

Great- Great- Great-Grandad told Billy Bob Joe, “If they turn you into a chicken nugget, they will take you to McDonalds.”

They ran out the door and into the deep fat fryer...