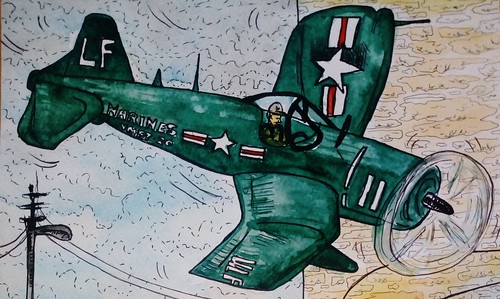 One day there was a nine year old boy called Phil who lived in a small cottage on St. Catherine’s Road. World War Three was going to happen that day.

Phil was going to town with his mother. When they got there, it was very busy - everyone was getting their last bits and bobs. A few minutes later, a loud deafening noise was heard from all around town. Everyone rushed to their houses.

Phil was all alone!  His mother had left with everyone else. No one could be heard or seen.

Well, that’s what Phil thought…Phil heard footsteps in the distance and then he heard plane engines. Phil looked up. He saw fighter planes flying round the sky. The footsteps became louder and then a man zoomed across the street and grabbed him.

The man brought Phil into a building. “Who are you?” asked Phil. 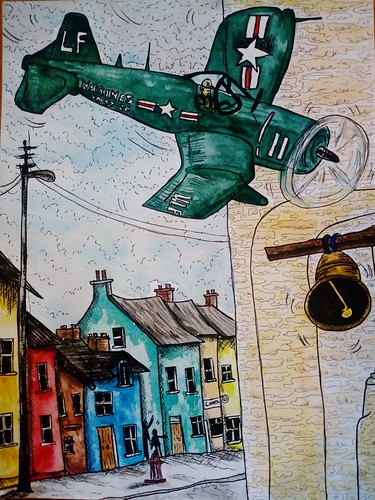 “What are you doing here?” the man asked.

“I came with my mother to get some food. I heard a bell and then everyone left,” Phil said.

Arthur Spandex explained, “That bell is the war bell. It is rung at the beginning of wars. Outside this place are Great Britain’s army leader Sir Barry Johnson and America’s navy leader, Cillian Barren. They have fighter planes, warships, cannons and guns. You’d better be more careful Philip.”

“What do we do if the building gets knocked down?” asked Phil.

“Oh.  Well, that’s where it gets complicated. So follow me.” Arthur walked across the wooden floor to a small gap in the wall. “Down here,” he said.

“What’s down there?” asked Phil.

So Phil squashed through the little crack in the wall and dropped down. Thump! Phil landed on a hard tiled floor.

“Wow,” said Phil. There were olden days toys everywhere: merry- go- rounds, Ferris wheels, and lots more. When all of the bangs and clanging was over, Phil and Arthur left the building.

Phil showed Arthur the way to his home. Arthur had nowhere to live. So when Phil got in, he asked his mother if Arthur could stay. She said that he would be able to stay for a little while but he will have to stay in the guest room.

“What is the dinner tonight?” asked Arthur.

Arthur loved Phil’s mum’s rosy chicken so much that he married her.