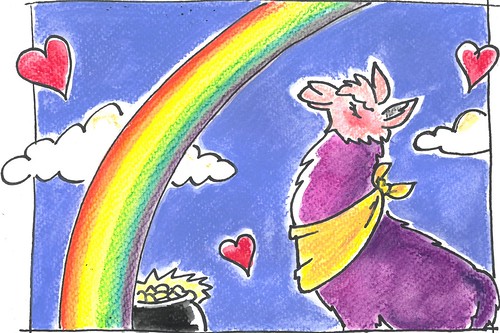 Larry the Llama was a pink and purple llama whose greatest wish was to live in a rainbow.

He lived in a cottage made of cheese, called Cottage Cheese.

The one thing that was blocking Larry from accomplishing his dream was Apple the Lemon, who owned most of the rainbows in the world.

Larry’s best friend, who lived with him in Cottage Cheese, was Lemon the Apple, the sweet brother of the aforementioned bitter Apple the Lemon.

One day, Larry and Lemon the Apple were sitting on a bench eating ice cream, their favourite food, when suddenly a rainbow formed in the sky.

Larry dreamed of living in the rainbow with his best friend but he didn’t want to leave Cottage Cheese.

Deep in thought, they were so distracted that Apple the Lemon came up and stole their ice cream. 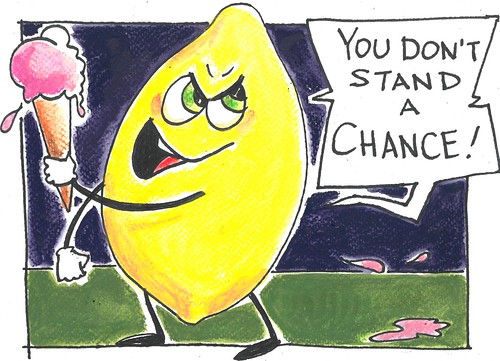 “Ha, you don’t stand a chance of getting that rainbow!” said Apple the Lemon spitefully.

“Leave him alone! Anyone should be able to follow their dreams!

Why are you always so mean to him?” Lemon said defensively.

Apple stormed off. In a rage, he threw the ice creams to the ground and jumped on them.