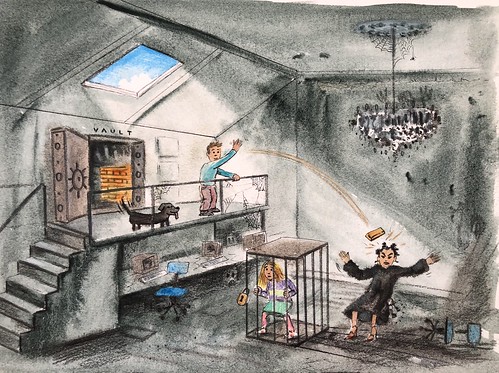 Sophia was picking flowers in a beautiful farm and singing to the animals on the farm. Her best friend was called Denny the sausage dog. She had a secret admirer who watched her from a distance as she sang to the animals. His name was Conor.

One day Conor was very brave and visited the farm to talk to the girl he had watched for so long. After a week or so of Conor visiting Sophia, they became very close. However, the evil Maritha was watching their love grow and became very jealous of the beautiful Sophia and her new friend.

In the village where they lived there was an abandoned bank. The bank was haunted, and no one liked to go in because it was very spooky. One day Maritha had enough of Sophia and Conor so she waited until Sophia was alone with Denny the dog and kidnapped her.

The next day when Conor came to visit her Denny was crying. Conor knew there was something wrong and he looked for Sophia all over the farm. She was gone. Denny then started to bark and run in the direction of the abandoned bank!

Conor was scared but he knew he had to save Sophia from the evil Maritha. Conor entered the bank through a window on the roof so Maritha couldn't see him.

Conor heard Maritha say, "HAHAHA! No one will save you now my dear!"

Maritha had Sophia locked in a cage. Conor was terrified but he knew he had to be brave to save his love. Conor quickly thought up a plan to save Sophia’s life. Conor ran to the vault, but it was locked. He searched for the keys and found them under a computer. He unlocked the vault to find it filled with bars of gold.

Conor grabbed a bar of gold and ran to the balcony so he could see Maritha and he quickly threw the bar of gold at her head. She fell to the floor and Conor grabbed the keys from her and unlocked the cage to set Sophia free.

They ran far, far away from the bank and never seen Maritha again. Conor and Sophia had a baby boy called Charlie and five months later they got married with Denny the dog by their side.

They all lived happily ever after.