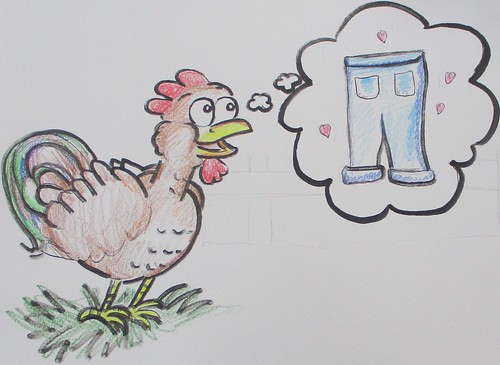 One day on Jack’s Farm, early in the morning, Jack went out to feed the animals.

As Jack was feeding all the animals, he realised Joe the Chicken wasn’t there.

Jack went to look for Joe the Chicken, who was trying to get into the house.

When Joe the Chicken got into the house, he went through the back door into the cow’s field to look for Daisy the Cow, who was his best friend.

Joe realised that Daisy wasn’t in the field, so he went back to the house to get some food.

After he got some food, he went upstairs and he looked inside of Jack’s jeans drawer and took a pair for himself. 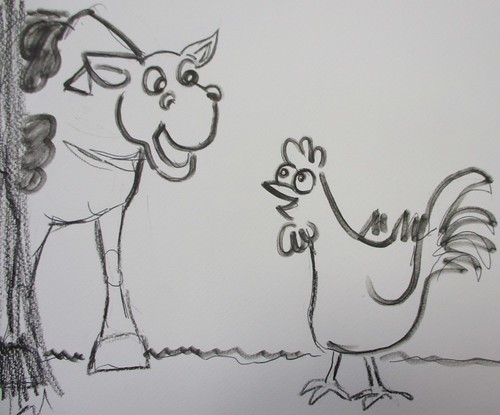 Joe realised that his legs were too short for the jeans. He had always wanted a pair of jeans.

He realised his goal in life was impossible.

Joe was going to look for Daisy and he saw a fox in the field. 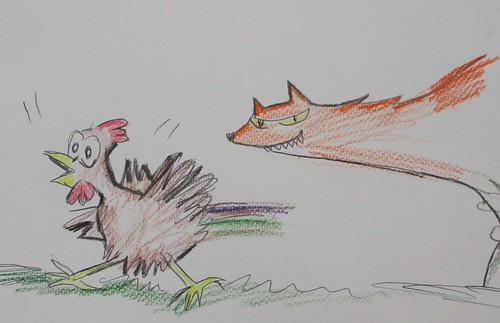 Joe got scared, his biggest fear was foxes so he ran!

Finally Daisy came back and shouted ‘Moo’, so the fox got scared and ran away.

Joe went over to Daisy and said, ‘Thanks for scaring the fox away’, and gave Daisy a peck on the cheek.

Later that day Joe requested to go to the shops to buy jeans.

Daisy said, ‘That’s preposterous, the path to the shops is through the forest and there are lots of foxes and other dangerous animals there’...