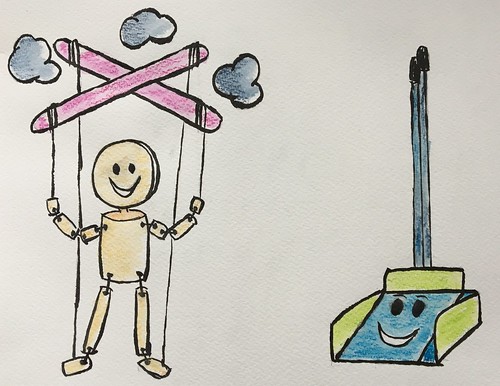 Once upon a time there was a puppet called Jeffy, who was sitting by the fire.

He spotted a green bean and he screamed.

“Ughhhhh!” he gasped and then vomited.

The green bean was his greatest fear. He ran backwards, turned and fell headfirst into the fire.

Jeffy’s best friend Bertie the Pooper Scooper had heard the scream, so he ran in to the room.

Bertie grabbed his friend from the fire.

“What happened to you? Why were you in the fire?” asked Bertie.

“Because I saw an evil green bean,” Jeffy explained.

Jeffy’s arms, his ear and his leg were all burned and Bertie had to stamp on him to put the fire out.

Lulu the love-spreading hamster and Danny the dog doctor arrived in an ambulance. They brought Jeffy to hospital.

He went into A&E, where he heard very bad news.

“The only cure for your burns is to eat forty green beans,” said the doctor.

Jeffy screamed and tried to run away. He couldn’t handle this news.

“I’d prefer to eat my hand rather than a green bean,” he said.

“If you eat the green beans, I’ll give you an Xbox and a copy of Fortnite for your birthday,” said the doctor.