It’s Amazing What Happens When You Go Over A Rainbow 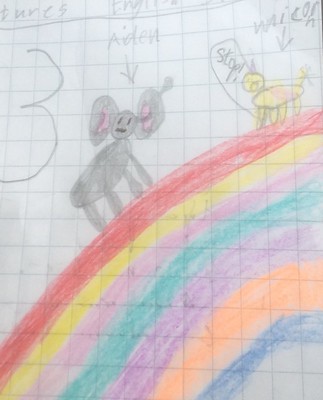 There was an elephant called Aiden. His greatest wish was to go to the moon.  His greatest fear was sharks and mice.  His best friend was a unicorn called Hudson.

Aiden and Hudson were the best of friends.  This friendship started the day the zookeeper left the gate open for the elephant enclosure.  So all of the elephants were able to run free!  Every elephant went a different way.  Some went south, some north, some east and even west! But Aiden ran up the rainbow!

He kept running until he saw a nice unicorn.  The unicorn ran to the elephant and cried,  “Stop! Stop! Do not go any further or you will turn into a unicorn.”

When Aiden heard what he was saying, he stopped so suddenly that he almost tumbled over! The unicorn asked, “Are you okay?”

The unicorn said, “My name is Hudson and I was about to go into the human world.  But since you’re here,” I won’t be going alone.”

They were walking when a little mouse ran up the rainbow.  Aiden did a really big trumpet sound and ran down the rainbow.  Hudson ran after him but he was only little, so he was way too tired to run any faster. The elephant kept getting smaller until he could not see the elephant anymore.  Hudson thought he could fly he said.  And that’s exactly what he did.

Hudson flew around the skyscrapers, over chimneys and under bridges.  He even flew into the sweet shop for a nibble to eat when he was flying.  Meanwhile, Aiden was running like mad.  He saw a boat and jumped into it.  He put an oar on his trunk and started rowing.

The rowing was too hard so he put his trunk in the water.  He started spinning it.  He kept spinning faster and faster until he was almost like a propeller going 70km per hour! Aiden kept doing this but then something bit his trunk and pulled him into the water.  The elephant freaked out because the thing that pulled him was a shark!  He grabbed the boat, kicked the shark back and off he went with an oar on his trunk, spinning it really fast.

Aiden saw an island and jumped on to it.  He shouted for help and the Hudson the unicorn came.  The unicorn told him to jump on his back and they went to the moon and had cheese and crackers.  They looked at the stars for a while.  Aiden said, “My wish came true because my wish was to go on the moon.”

Aiden went back to the zoo.  Hudson said, “I am going to be living in the farm behind the zoo, so in the night I will come over to see you.”

“I hope you’re right,” said Aiden and he laid down to go to sleep.  Hudson did the same thing and they lived happily ever after.