Skip to main content
Home Stories A Home for Friends

A Home for Friends 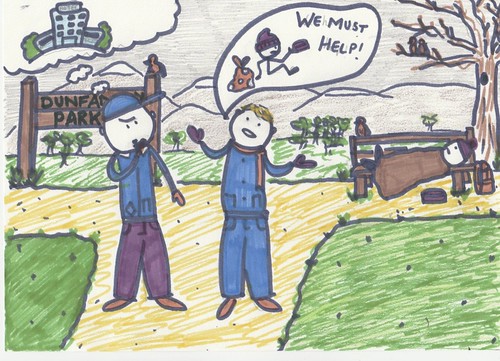 Mr Tom flew on a plane and moved to the hills of Donegal because he wanted to spend time with his best friend Ken.

Mr Tom wanted to help out other people who were in need.

Some people in the cities and in the country were homeless and the government needed to build new houses in the villages and towns. The St. Vincent de Paul needed more money too.

Ken and Mr Tom bought a new hotel. Ken was the manager and Tom was the cleaner.

In the hotel in Dunfanaghy, Co. Donegal, Mr Tom saw some small spiders crawling on the roof. Mr Tom cried, “Aaaaaaagh! I don’t like spiders!”

They wanted to fix up the hotel to house the homeless, so they set up a GoFundMe page. There was a mixed reaction the page on Twitter.  Some people were said, “Yeah, I’ll give you a thousand!” Others said, “Nah.”

And then, Mr Michael D. Higgins, the President of Ireland, came along and began telling them about all of the places that he had visited.

Nadia said that her favourite place to visit was the country of Vietnam, and the president said in his soft, delicate voice, “I’ll donate a million!”   After that, President Higgins got into his Ferrari and wrote out a cheque.

Another reason why Mr Tom was doing all of these good deeds was to give Ken a job. One night, Mr Tom and Ken were standing on the balcony in the top room and they saw stars falling from the sky. 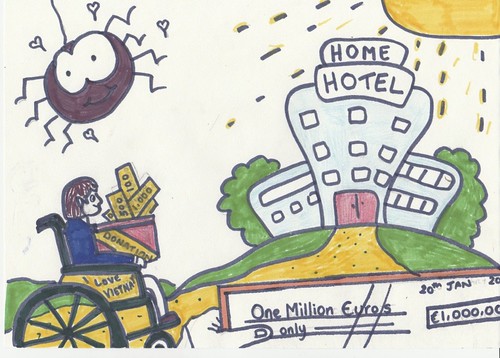 They stars made a huge show. Tom watched a spider on the wall.

The spider ate the bugs and Mr Tom said to Ken, “Look! It’s fine, they are good! I’ve conquered my fear of spiders. They are helping us by eating the bugs.”

Where there was no more homelessness in Donegal, Mr Tom and Ken left the hotel.

They felt they could do more, so they decided to run for the Dublin elections because they want to help out people by being in government.

Mr Tom and Ken wanted to help people all over Ireland, the homeless and the less fortunate.

Ken liked spiders but he kept asking, “Why do they like to eat bugs?”

Mr Tom felt confident and accomplished but wanted to make the hotel better.

Nadia was surprised and happy she got a million euro off Michael D. Higgins and they became best friends.

It doesn’t matter if you have a disability or not, you can still achieve your goals and dreams.