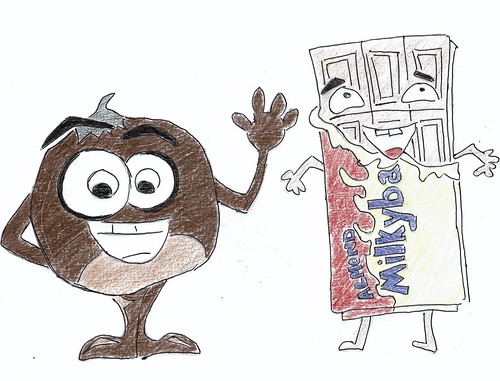 One day Nutty the Chestnut fell down from the Chestnut Tree. He fell into Mr Burton’s bag and was taken back to his house.

There he met Almond the Milky Bar who was in a bowl. He unwrapped Almond and they became friends.

Next day they jumped into Mr Burton’s bag and went to work with him at the chocolate factory. They got out of the bag and they were lost!

There were loads of humans around and they had to keep hiding. But someone found them and they got put in a box and driven away in a truck.

The box was delivered to a house and when they jumped out of the box they found that they were back in Mr Burton’s house.

They went upstairs and into his bedroom. They saw a boy called Ben flying a kite. They jumped from the window onto the kite.

Ben let go of the string and away they flew.

They flew down low but the kite hit a man in the street. The man picked Almond up and took a bite out of his arm. 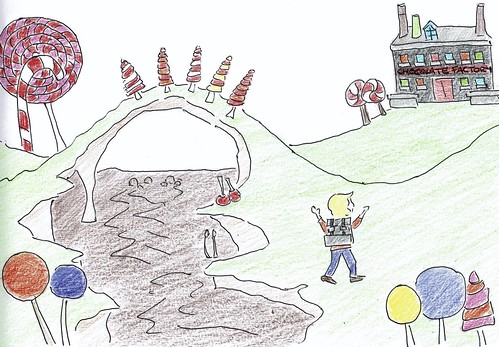 Nutty ran with Almond to the chocolate factory and got some chocolate to fix his arm, and some caramel to stick Almond back together.

They tried to sneak out of the factory though the chimney but there was a big fan blocking the way.

It was spinning very fast so they decided to try and stop it.

But they couldn’t, so they found another passage that took them back outside.

There they found a badger hole. Almond checked that it was safe and they went in.

Meanwhile the man was hunting for Nutty and Almond. He wanted to eat more of Almond and to crack Nutty.

Nutty and Almond came out of the tunnel and found themselves in a desert. It was nightime and getting really dark.

Nutty looked down and kicked the sand. ‘What are we going to do?’ he asked, but when he looked up Almond was gone, and he saw the man sitting on a camel and eating a coconut...