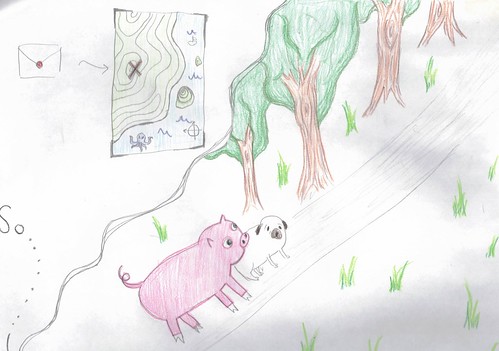 Gisha the cross-eyed pig lives in a big mansion. She is very popular at school and everybody knows her.

One day, Gisha’s best friend Millie the chubby pug went to the mansion.

Gisha came to the door and said to Millie, “Wipe your dirty paws!” They walked into the mansion.

Gisha and Millie were looking out the window as they were bored of television.

They saw an asteroid hitting the ground.

Gisha said, “This sounds like me going up the stairs after eating a really heavy meal.”

Millie went over to Gisha’s bed and crouched under it. She was really scared.

They heard a knock on the door. They went downstairs to answer it.

There was nobody at the door - but a letter flew through the door into the hallway.

Millie says to Gisha, “You open it, I am really scared!” 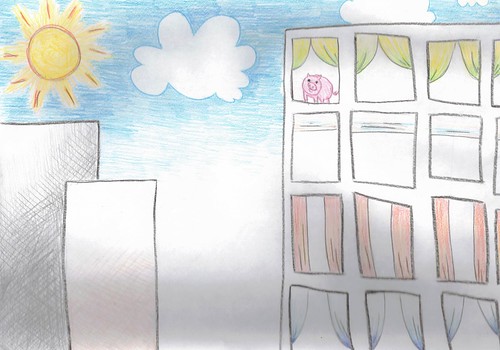 Gisha opened the note and saw it is a treasure map.

Gisha and Millie set out together using the treasure map.

The map began to lead them into the mountains.

As they were going up on the trail into the mountains, Gisha realised she has forgotten her purse.

But then two free coupons for skydiving land right beside them!

Gisha went to grab them, but they blew away. The two coupons blew onto a log, which was going down a very fast stream.

Millie the pug said, “It’s too risky. Don’t chance it!”

Gisha had already decided she was going to chase that log, because her love was skydiving.

She said to Millie, “You’re just scared, I am the brave one here.”

They saw air bubbles in the water so they knew there was something underneath the water.

Gisha jumped into the water to chase the log. Millie stayed on to the side and watched Gisha go in.

She said “Forget this - I am getting out!” but she cannot get out.

Meanwhile, Millie watched a volcano erupt in the distance while Gisha was going down a waterfall…