The Giant Pigeonzilla and the Hole of Hand Sanitizer 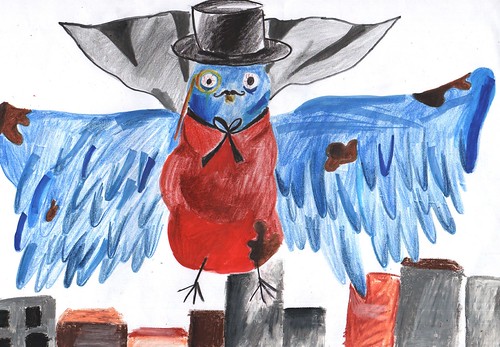 One time there was a very young pigeon called Stephen. He was pretending to have a shower because he HATED cleaning homself but his mum said he had to be clean.

In the shower he found a button that, when he pressed it, opened up a secret passage-way.

The passage led into a secret lair, where there was a majestic, golden haired donkey, holding a potion.

Stephen flew up to the donkey and flapped the potion out of his hoof. He drank it and turned into an enormous bird witha  monocle and a top hat.

The donley was too distracted watching YouTube videos to notice.

Stephen flew all the way to Beijing. While there he met Jezza, the fox-headed flipper. She was doing a quad-backflip into a foam pit, off a diving board.

Stephen was too star-struck to speak, and Jezza couldn’t talk, but only mad weird noises:

They started texting each other, and walking together, but fell into a really big hole full of hand sanitizer!

A wizard apeared out of the wall and said:

‘‘I’ve trapped you because you smell like a wet donkey and now I’m going to clean you!’’