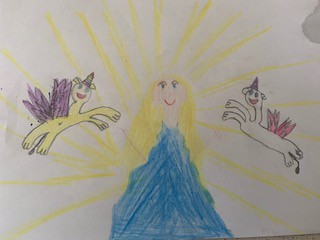 Once upon a time there was a dog with a horn. He spread happiness, joy and peace. It was a golden dog. Everybody loved the dog. Well, the dog was only a myth to them. Only some people believed in him and the people who believed in him got to see him. However, their friends and family said it was just their imagination. Their friends and family didn’t know that the dog was true.

Oh, he was very true.

One spring day, the dog was flying and spreading happiness when he fell into a tree and fainted. He landed on a trampoline in a back garden. A girl heard something on her trampoline and ran out of her house to see what was happening.  Sally was her name.  She snuck him into her bedroom and covered him with a large, check blanket so her parents would not see.

When the dog woke up, Sally was next to him. “Where am I?” he asked.

“You are in my house,” she answered. “My name is Sally, what is yours?”

“That’s nice to know. I should let you go now but one more thing,” she said.

“I have a friend” Sally explained. “I want you to meet her.”

Just at that moment, another winged and horned dog flew into the bedroom through the open window. She was white like snow.

“Sam meet Annabel, Annabel meet Sam,” Sally said introducing the two flying dogs to each other. “Just in case you fall again, you might not be so lucky next time. Now if it happens again Annabel can help you,” said Sally.

Now Sam and Annabel go everywhere together, guarding and protecting each other whist spreading happiness, joy and peace.