The First Bunny in Space 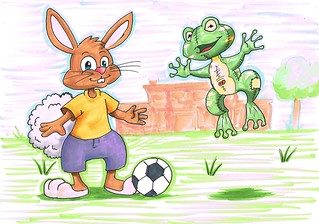 Mr. Fluffybottom was in the playground playing soccer with Inflatable Frog.  Bruce and Brunch, the bullies, suddenly appeared from nowhere and kicked the ball away and started shouting.

“Why are you in goal when you can’t even catch a cold?” said Brunch.

“You just wait and see! I’ll show you, I’ll be famous.  I’m gonna be the first bunny in space!” said Fluffybottom.

“WHAT’S THAT GOT TO DO WITH ANYTHING, YOU SILLY BUNNY!” said Bruce. 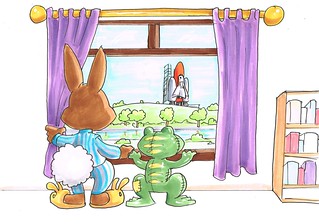 With that, Inflatable Frog’s neck started to get bigger and bigger until it was so big it bounced Bruce and Brunch away out of the playground.

“Thanks, Inflatable Frog—you’re definitely coming with me on my space adventure,” said Fluffybottom.

The school bell rang. Everyone rushed out.

Fluffybottom and Inflatable Frog nearly got squished in the rush of the stampede.

Inflatable Frog jumped on Fluffybottom’s back and then they hopped off home.

When they arrived home, Inflatable Frog jumped off Fluffybottom’s back and they went back inside.

The next morning, Fluffybottom and Inflatable Frog woke up to a huge ROAR.

Immediately, Fluffybottom jumped out of bed, ran to the window. He looked outside and he saw a HUGE gleaming, type-22 beautiful shining rocket across the river.