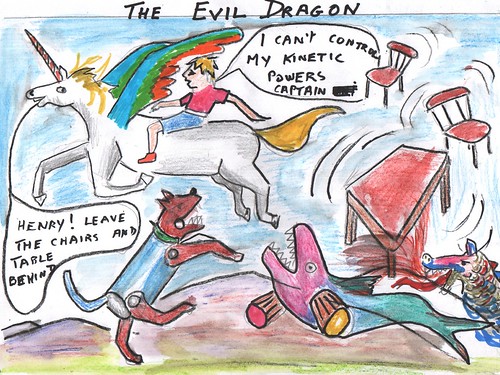 It was a dark and stormy night, when Henry, the telekinetic boy found a new friend, called Captain Unicorn.

He was going out for a walk in the woods when he came across a shack in which a dragon lived.

The dragon attacked him.  At that point, Captain Unicorn swooped down, broke through the roof of the shack and rescued Henry.

Unfortunately Captain Unicorn badly injured his right wing. He crashed onto the ground.

“Are you OK?” asked Henry

“We need to try and get you to safety” he said.

As they were leaving, the Dragon with blood shot red eyes said:

As if! In your nightmares baby!” replied Henry.

They arrived home and had some tea.  Henry told Captain Unicorn:

“Many years ago some kind of monster, a Dragon, attacked my parents and killed them.