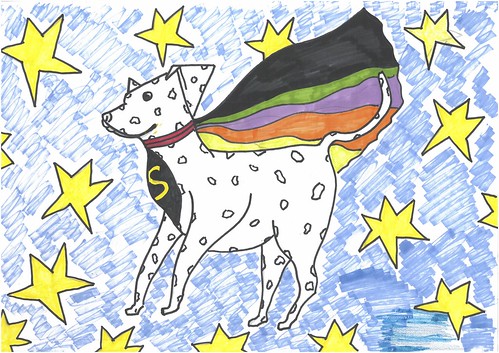 Danny the Dalmation was walking around and a robot called Metro come along and blasted him. This was how he got his superpowers.

Metro said “These powers have to be a secret”

“What are these superpowers?” asked Danny.

“These powers” said Metro ”will make you strong and invincible and give you laser beams out of your eyes which will burn anything!”

Danny got so excited he wanted to go home and tell his younger brother Martin that he now had superpowers.

When he got home he discovered that his brother and their robot dog had been kidnapped by Dr Bubbles. Robot dog can transform into anything he wants to.

Robot dog then turned himself into a key that could open the door to where Dr Bubbles had imprisoned Martin.

When they opened the door- it was a trapdoor and …