Curls the Half Human Half Unicorn 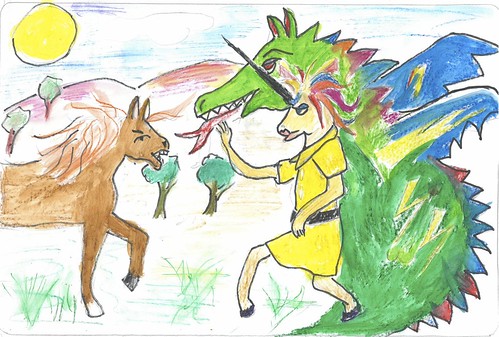 In the woods in Neverland where the trees were made of cotton candy and the grass was chocolate, there was a unicorn called Curls.

She was half human half unicorn and she had a brother called Bibbly Bob.

She also had an evil step brother called Fred the evil pony.

She was born into a human family who knew they couldn’t take care of her because she was half human and half unicorn.

She felt upset because she wasn’t accepted.

Fred the evil pony was in a fight with their mother and father and he killed them.

The family had to leave Curls in the forest for animals to take care of her.

“Where am I?” said Curls in a sad and confused voice.

Just then she followed a bunny up a very high mountain where she bumped into Dave the Dragon who woke up from a sleep and roared at her!

After she realised he wasn’t a monster, she told him her wish quietly: