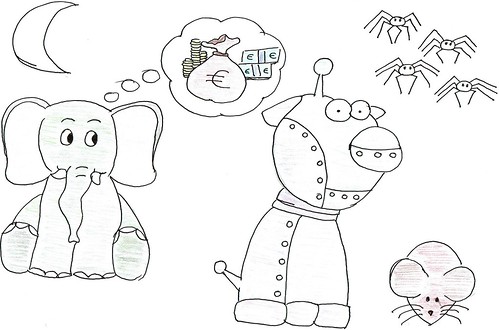 Billy the elephant was sitting down drinking water when Cody the robot dog came into the room. “There is a bat in the hall!” he cried.

Billy ran away and nobody saw him for two days. While Billy was gone, lots of rats came into the house.

Cody said,“Im going to eat them all!”

The electricity went so Cody could not charge up. That meant that he could not eat the rats and bats!

Billy came back from Orlando, Florida wearing a Mickey Mouse hat. He went to his cousin the rat’s house and jumped out the window.

When he fell out the window, Billy landed on the end of a rainbow, finding millions of euros!

Billy's cousin the rat called out for help. “Can you help me, please?”

So Billy brought the rat to his house where all the bats and rats were now living.

He put the rat inside Cody the robot dog. With the rat running inside, Cody he was able to charge up again.

Cody was able to eat all the rats and tarantulas now. They thought they were safe.

But suddenly a lady called Sky came busting through the wall and announced, “I’m here!” ...