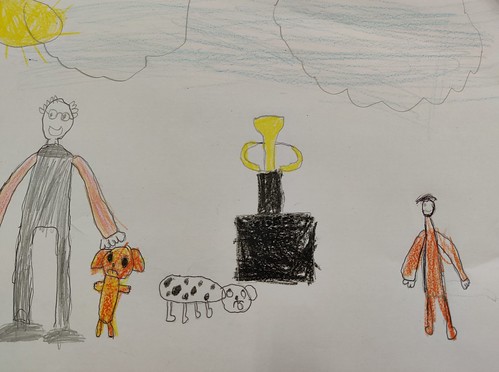 One summer evening in Cookieland, Oreo, the black and white dog, and Cookie, the golden brown dog, went to the Oreo shop. Oreo went over to the original Oreos and Cookie went to the golden Oreos.

After they got the Oreos they left the shop, only to see two people in a pound truck. Oreo and Cookie ran away but the people got out of the Pound truck and chased them.

“Run far away!” Cookie screamed in a scared voice

Oreo ran as fast as he could until he reached a dead end. He jumped over the wall and found Tasha, the golden labrador.

“My friend is captured,” Oreo said in a frightened voice. “Can you help me get him?”

Tasha said, “I saw everything and I might have a few friends that can help.”

Suddenly, the Gardai showed up and arrested the two pound people because they threatened the dogs…

The Gardai decided to bring the dogs with them to train them. The Gardai asked Cookie and Oreo if they would like to work with them to help them track down bad people.

Cookie and Oreo were very happy to do this.

When Cookie and Oreo got to the police station, they realised there were lot’s of other stray dogs there that the Gardai were taking care of and training.

Cookie and Oreo worked really hard with the Gardai. They were so happy to be helping out. They were so good at helping them catch criminals that one day the President of Ireland came to the police station to see them.

The President asked Cookie and Oreo to be his guard dogs and stay with him at Aras an Uachtaran.

One day, the President’s son, Max, went for a walk. Two people kidnapped him. Oreo and Cookie ran after the van and followed it. The van ended up at an abandoned house.

The two kidnappers left Max in a basement. They left the house for a few minutes. Cookie and Oreo snuck inside and freed him. Max rang his Dad to tell him what happened. The President came to rescue Max.

When the President arrived, he had another dog with him.

Oreo ran over to the dog. It was his Dad! Oreo was so happy to see him. The President awarded Oreo and Cookie the “Best Dogs in Ireland” award for saving Max.