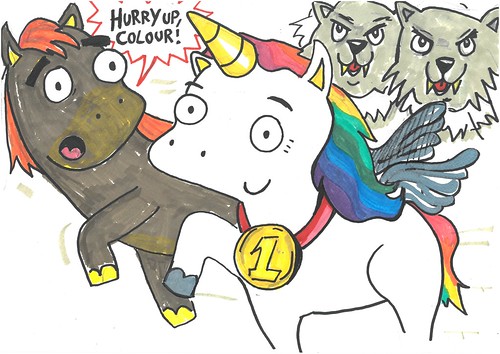 Once upon a time, there was a rainbow unicorn called Colour. Her best friend was a horse called John.

One day, they were walking on the beach in Bettystown when they saw a wolf. They got a fright and started running.

John the horse was faster than Colour.

Colour the rainbow unicorn opened her wings and started to fly.

“That’s better!” said John. “If you enter the Unicorn Olympics, you’d win it!”

John came up with a training schedule for Colour. Colour did sprinting, running around the pitch, spreading her wings and advanced flying.

What Colour and John didn’t know was that secretly, the pack of wolves were planning to disguise themselves as unicorns and enter the final.

The day of the finals of 200 metre sprint came. Colour was all set and ready at the starting blocks.

Colour looked beside her and got a fright. There was a pack of badly disguised wolves next to her.

The wolves had an ice cream cones taped to their heads and were covered in coloured cardboard. 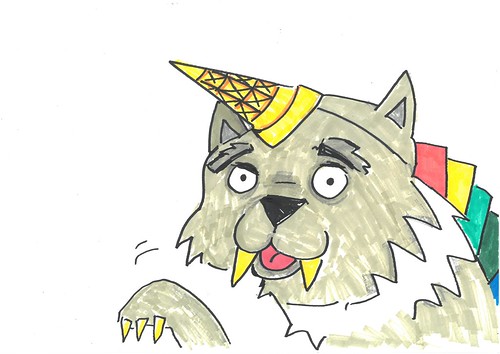 Colour started flying but the wolves were cheating.

They ran up the banks to pass out Colour.

John was on the sidelines. “Run, Colour, run!”

Colour didn’t hear him. The wolves were nearly at the finish line but Colour ran with all her heart and – WON THE RACE!

Colour won the gold medal. The wolves left in a huff.

John and Colour celebrated by going back to Bettystown and having picnic on the beach. They ate sandwiches, buns, sweets and drank some orange juice.

“All the way to the Space Unicorn Olympics!” said John.