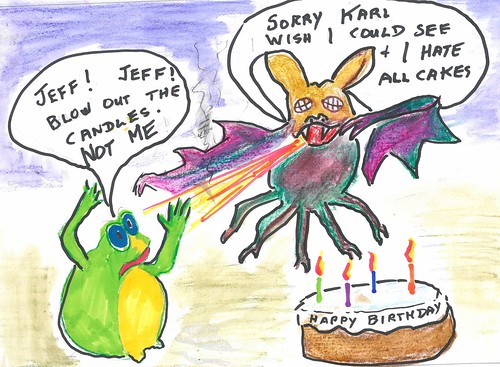 Once there was a five legged bat called Jeff. He was very unique, because he could spit fire.

Not too far away Karl the frog is sitting in the same place he has been for the past year.

This was because he has no legs. In the not too distant past there had been a war in which Karl had lost his legs in an explosion.

Because Karl can’t go anywhere Jeff comes to visit him.

He helps him with his daily chores. He collects sticks, puts them in his fire place and spits fire on them.

“I wish I had legs like you Jeff” says Karl. “If I was a tadpole again it would be easier.”

“How about this,” says Jeff “we go to The Cake of Doom and there we can swap four of your legs for one of your eyes.”

“Wait for me!” calls Jeffina…