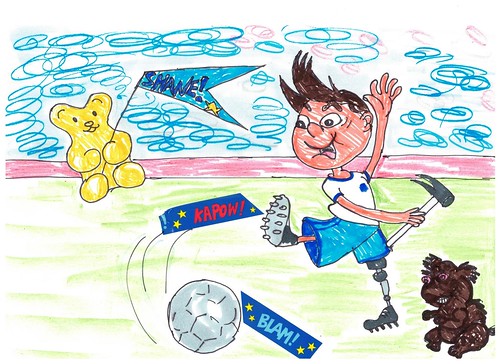 Shane is playing in a match. He’s just about to score the winning goal.

The crowd is silent. Shane swings his hammer and the ball goes into the back of the net.

The crowd roars and Shane’s team rush over and pick him up.

Billy, the tiny vicious fluffy hamster, is woken by this loud roar. He’s very angry and he rushes over to confront the crowd.

“It’s the hamster!” one of them yells and they all run away, dropping Shane straight on to Billy’s tail.

“Crikey, what’s that!” exclaims Billy. He has bitten into Shane’s prosthetic leg.

Shane tries to whack Billy with the hammer but misses. The hammer bounces up and hits his good leg.

Shane tries to grab Billy’s neck but he escapes.

Kenny the gummy bear is watching from the sidelines. He rushes onto the pitch.

“Are you okay?” he asks Shane. 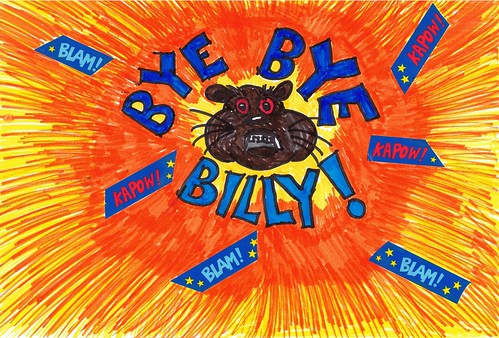 “Do you think I look okay? What do you think?” says Shane.

“ I know what to do,” says Kenny, heading off to get in his gummy tank so he can look for the hamster.

The team come back and put Shane in a wheelbarrow to carry him back to the dressing room.

They tell him there was a scout watching the game and he wants to speak to Shane.

“My name is Joe, I’m a scout with the Australian team.

I was watching you from the crowd and I want you to play for us in the World Cup.”

The team is silent, waiting for his response. Shane is so overcome that he faints.

Meanwhile, Kenny has found Billy at the back of the bread factory eating the next day’s delivery.

He jumps out of the tank, sneaks up behind Billy and takes him hostage with his gummy taser.

Kenny drags him over to the bin and throws him into the rubbish, just as the rubbish truck is about to arrive…