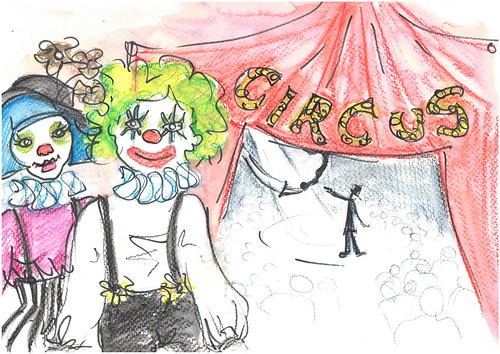 Once upon a time, Fred the Clown was in the circus and he saw someone called Melissa the Clown.

They went for tea. And at the café, a kangaroo showed up with boxing gloves.

When the kangaroo came in, Fred the Clown started to get a little nervous. The kangaroo wanted to start a boxing match.

Melissa said, “There’s no need to be nervous, it’s just a kangaroo.”

Fred said, “I want my mammy!”
Melissa told him, “Stop being a baby. Just tell him to go away.”

When the kangaroo hopped over to the table, Fred the Clown fell into his cup of tea.

He ran into the bathroom and Melissa started to talk to the kangaroo.

The kangaroo answered, “Only if someone gives me a boxing fight.” 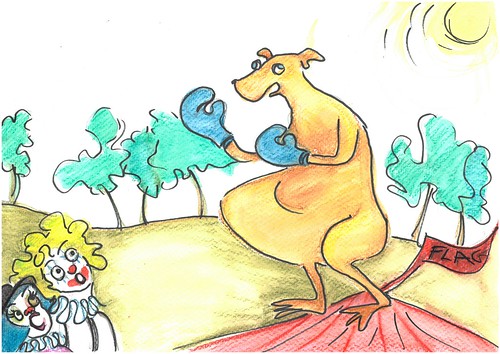 Fred the Clown ran out of the bathroom and said, “Get your hands off my wife!”

Melissa started blushing and they ran away from the café, back to the circus.

All of the sudden they heard a noise: “WHERE IS FRED?”

The kangaroo ran over and hit Fred in a drop kick.

Melissa was mad at Fred for saying they were married, because they weren’t actually married.

They had only met that morning. The kangaroo was sitting on top of the circus tent and Melissa kicked him off! The kangaroo broke his arm.

Fred was worried that he was next…