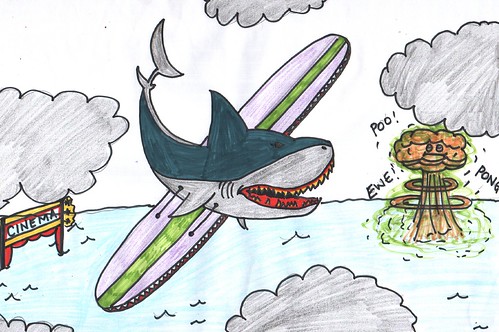 Once upon a time there was a baby shark that was born, who was unusual.

He had wings when none of his brothers and sisters did.

One day Bob the flying shark went home and no one was there and he got some porridge but it wasn’t normal porridge.

It made him grow massive.

After eating the porridge, he went to the pictures with his best friend, Sunflower the Swordfish.

Sunflower was yellow, had wings and was giant.  They watched Jumanji in an underwater cinema.

While they were in the cinema, Bob sneaked up on people and tried to scare them.  Bob shouted “BOO”.