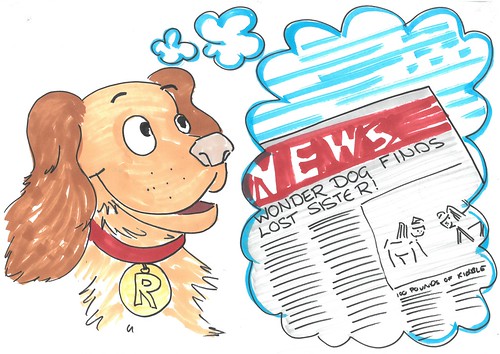 The wind was howling. The sky was dark. Roscoe the dog was in a gloomy alley, barking at a poster of a dinosaur.

A wild dinosaur ran down the alley and scared Roscoe. “Roar! Boogly, boogly!” screamed the dinosaur.

The Dinosaur, Frank, was trying to figure out why Roscoe was barking. Roscoe was terrified and ran away yipping.

Roscoe ran down a dead end street and the dinosaur caught up with him.

The dinosaur couldn’t catch his breath because he never ran. 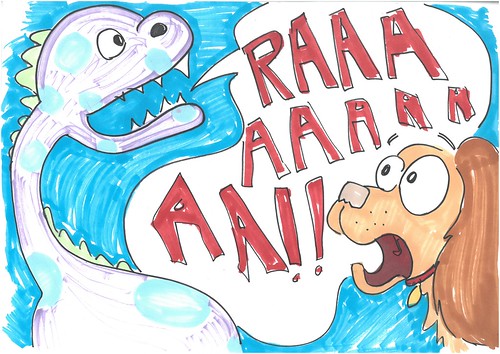 He played video games and ate chips and cake all of the time.

“I was just trying to help you,” the dinosaur exclaimed. “There is a pterodactyl who has your sister, Rosa, in a cave.”

Roscoe said, “I have been trying to find her.

I had a hunch that a dinosaur took her and was checking the poster for suspects.”

Roscoe and Frank made a plan to search for Rosa.

Meanwhile, Abby the Cat, Roscoe’s best friend, was on her way to the cave to save Rosa. 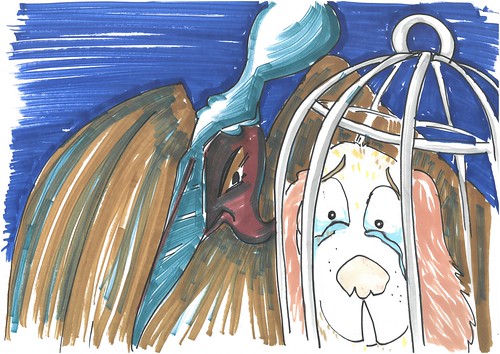 She had seen the pterodactyl flying through the air with Rosa in her claws.

Abby had gone to search for Rosa on her own because she didn’t want Roscoe to get hurt.

She knew she could see in the dark cave because she is nocturnal.