Skip to main content
Home Stories Beware of the Butcher

Beware of the Butcher 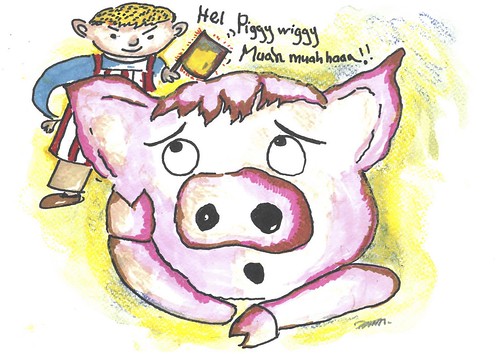 One day Bacon the pig was sleeping in the pigpen. There was a smell of manure in the air.

After he woke up he took his first step and jumped into his mud bath.

He walked over to his best friend Steak the cow’s pen and saw him looking for his brother, Jeff. Jeff had been missing since the night before.

Steak got his cow-radar and tried to use it to locate his brother. Bacon was worried that the butcher, who he was very afraid of, had taken Jeff.

Bacon decided not to tell Steak that he had seen cow tracks leading out of the woods down to the butcher’s house. He decided to go investigate to make sure he was right.

It was Halloween and Bacon wanted to dress up as a Unipig. He trekked through the forest and found an abandoned pigpen.

Suddenly, an old, wrinkly pig fell from the sky. He fell into a pile of manure.

When he was falling he yelled to Bacon, “Catch me!”

Bacon was so focused on trick-or-treating that he didn’t have a chance to catch the wrinkly pig. A little splash of manure landed on Bacon’s nose.

Bacon asked, “Are you done yet? Can I have some Halloween candy now?”

The wrinkly pig was actually a wizard named Kong. Kong shouted to Bacon, “Why didn’t you catch me?!” 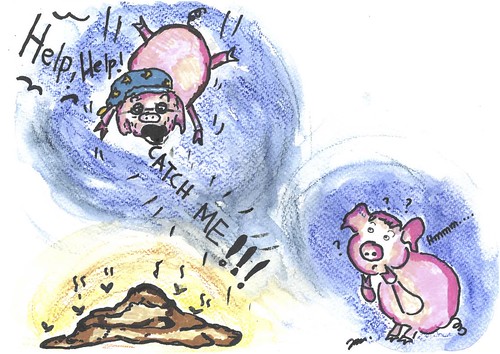 “I’m not meant to talk to strangers,” replied Bacon.

“I appeared to grant you three wishes,” Kong explained to Bacon.

Bacon replied, “How about for my first wish you make me into a Unipig, as that’s one of my greatest dreams.

My second wish is to find the magic pig manure. My third wish is to have a lifetime supply of bacon.”

Before I grant your wishes, you have time find the golden knife from the butcher,” said Kong.

With that, Bacon set off on his journey to find the golden knife and Steak’s brother…