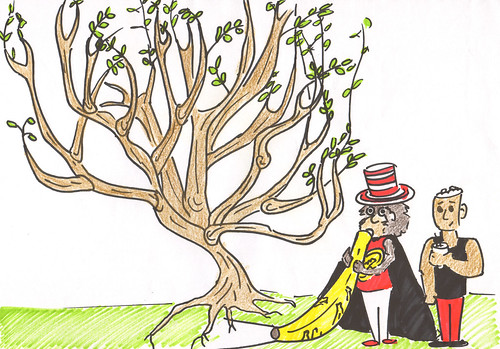 He had a best friend who was called Jeff The Coffee Cup. He sprayed coffee out of his hands.

Amazing Monkey Man wants a banana planet, but the ones that can see it are apes and monkeys.

The only way Amazing Monkey Man could get to the banana planet was by climbing a jungle tree.

He got the seed for the tree after he fought the Mighty Minotaur.  He put the seed in the ground and asked his friend Jeff to spray some coffee on it to help it grow.

The tree was twisty and curly and it had a lot of branches. The ground was shaking as the tree was growing. 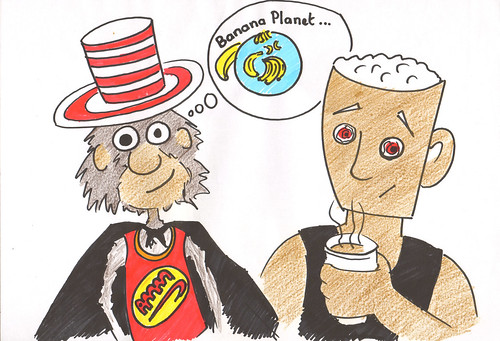 Amazing Monkey Man called the apes by blowing into his didgeridoo made of bananas. When Jeff was a baby he was taken in by the apes.

He could see half of the banana planet, but not the whole thing.

“I am planning to destroy the banana planet using my blaster 2000,” shouted The Emperor Scorpion.
His minions started clapping their claws in anger.

“Whoa we finally made the giant tree,” said Amazing Monkey Man.
“Nice work, how will I get up it?” asked Jeff.