The Adventures of Doris and John 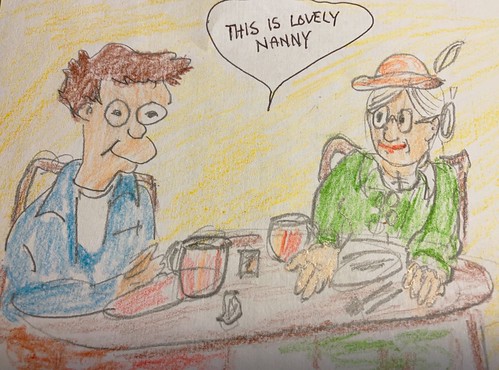 Before the bingo, Doris and John were having a cuppa and a fry in the Fresh Café. John had been living with his Nanny Doris since he was eleven. They went to bingo every Wednesday and before it started, they always grabbed a fry and have the goss.

Doris had news for John but didn’t know how to break it to him. She decided to break the tension. “You know your one off the telly?”

“You know her, she’s your one off the telly.”

“What programme?” John looked around, confused.

“EastEnders?” said John, knowing that’s the one she is on about.

“Yeah, that one. That’s the one,” said Doris, excitedly tapping the table with her finger. “I think she has blonde hair.” She put her glasses on. 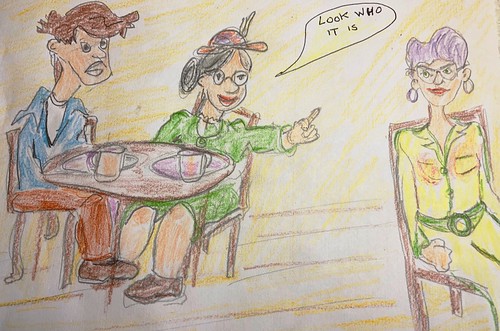 John agreed, “Yes, she does. I seen her walking down the road a few days ago.”

“I think that’s her sitting over there!” said Doris.

“Do you think she is with any other members of the cast?”

“Yeah, they are in that studio down the road.”

“Do you think your man Phil is there?” said Doris, fixing her lipstick.

John laughed and shook his head. Doris closed her mirror and looked at John seriously. Her heart was racing, knowing John wasn’t going to be happy with what she was going to tell him.

“John, pet,” she said worriedly. John looked at his grandmother, suspicious of what she was going to say. Doris stared out of the window, unable to look at her grandson as she remembered the phone call she got earlier from John’s parents.

“Why? What’s up, Nanny? Is there something you need to tell me?”

“Yes,” Doris took a breath. “Unfortunately, John, I’m not getting any better.

“What do you mean? You never told me about anything.”

“Well, John, I’m an old woman. Unfortunately, I won’t be around forever.”

“Nobody is here forever but you won’t be goin’ anywhere anytime soon,” John said. 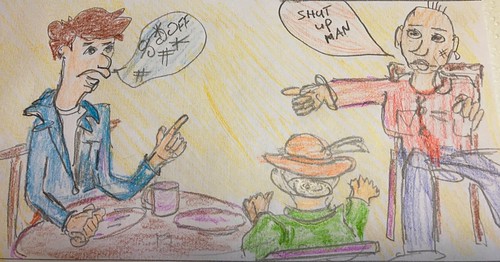 “But John, I’m being put in a home!” Doris blurted out.

Everyone in the café looked over at the old woman.

John looked up and growled. “What the f**k are yous looking at!?”

Everyone looked down at their plates awkwardly.

“Why should I watch my language if these can’t even mind their own business?” said John.

A man in the café stood up. “What’s your problem?” he asked. 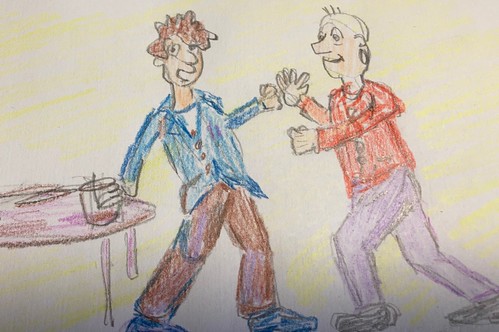 John dodged a thump from the stranger, picked up a coffee from the table and scalded the face off him. Doris ran out the door as fast her little legs could carry her.

John followed her, as quick as he could, as Doris was waiting at the passenger door of his car. As they reached the Ford Focus, the crispy-faced fella popped his head out of the café and said, “I’m goin’ to catch you at the bingo!”

Doris ran back to the café and rapped your man across the forehead with her bag. “Don’t get blood on my new bag from H&M.” 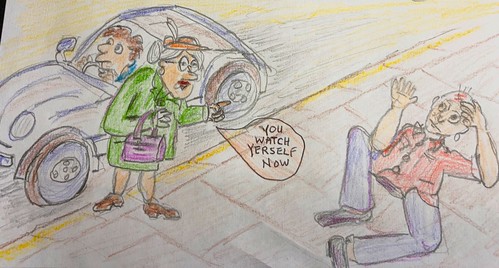 The guy was busted up on the ground like a pretzel. Doris said, “Don’t touch my John.”

As they drove away, Doris continued the conversation. “I don’t want to go to a home, John, but I have Alzheimer’s.”

As they drove off, John replied, “You’re not goin’ anywhere Nanny!” …